Norfolk will go into Festival of Cricket in a strong position

Norfolk will go into Festival of Cricket in a strong position 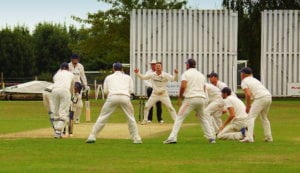 Norfolk set themselves up nicely for the annual Festival of Cricket at Manor Park by recording an excellent win at Cumberland in their second Minor Counties Championship match of the season.

Last month’s opener at Cambridgeshire was cut short by rain with Norfolk in a strong position, but there were no problems with the weather this time around as they romped home by six wickets.

The victory left Norfolk seventh in the East Division table with 33 points from two matches – but they have a game in hand on all the teams above them and will go into the Festival in a strong position.

They play second placed Lincolnshire in the opening game starting on Sunday week and could go above them with another win – so their ambitions will be a lot higher than merely claiming a top five spot to secure a place in the First Division of the new-look set up for next season.

Norfolk put a tough first day behind them to take the spoils in Barrow. After being asked to bat first in overcast conditions the hosts reached 303-9 in their 90 overs, with Michael Slack, Sam Dutton and Jacques du Toit all passing 50 as spinners Ryan Findlay and Ashley Watson, with four and two wickets respectively, did most of the bowling.

Norfolk slipped to 54-3 in reply before Jason Reynolds (50) and Stephan Marillier (59) set about repairing the damage, with the visitors finally bowled out for 250.

It was then that Watson’s men started to turn the screw, despite Callum Metcalf being unable to bowl after suffering a reoccurence of a previous back injury. Andy Hanby clean bowled both Cumberland openers and the good work continued, with Watson and Findlay both getting in on the act. Cumberland slipped to 49-6 and despite a composed 60 from du Toit were all out for just 135, leaving Norfolk with a victory target of 189.

The hosts made some early inroads but Tom New was in a determined mood and with the support of Marillier played a true professional’s innings to lead the victory charge. The pair had put on 95 when New was run out for a patient 58 while Marillier, playing a more constrained role than usual, was still there at the close on 62.

Metcalf has been told to rest for two or three weeks following treatment by a physio in Barrow but the good news for Norfolk is that fellow allrounder Ben Coote will be available for the Festival.

Norfolk Under-15s qualified for the national semi-finals with two games to spare thanks to a comprehensive demolition of nearest rivals Hertfordshire who were dismissed for 71, with Harry De-Coteau Spring taking 8-4-6-3 and Ben Wilcox 7-0-18-3).

Norfolk knocked off the runs required for the loss of just two wickets as man-of-the-match Wilcox made 42 in 35 balls.