Mike Hanby has taken over as chairman at the AGM from Richard Wright who has served the county with great distinction over the last six years after succeeding Graham Littlewood as chairman in 2015. Richard has been a great ambassador for Norfolk and is highly regarded at all levels within the game. 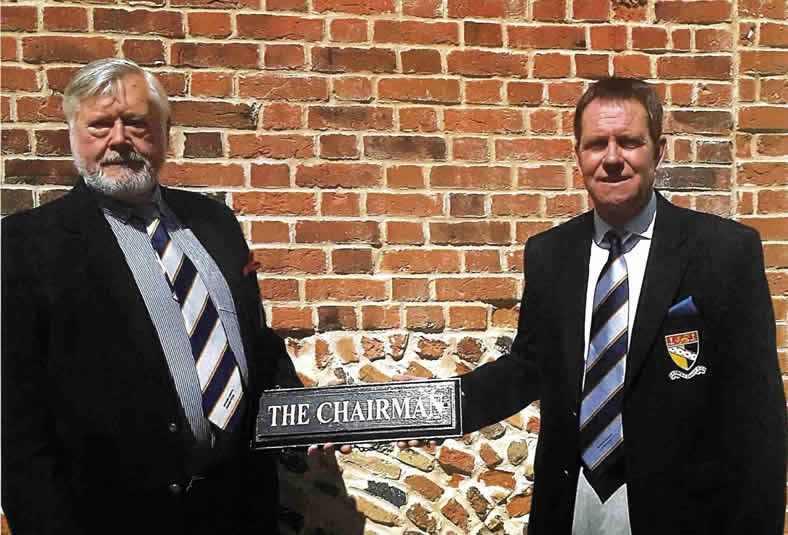 The rest of the committee were re-elected apart from Stephen Skinner who is standing down as secretary after many years of sterling service. An announcement on Stephen’s replacement will be made shortly.

Richard said “whilst I was aware of the splendid job Graham did it came as quite an education to me when I realised how the position sat at the very centre of County Cricket in Norfolk. To be the temporary custodian of an institution which was formed in 1827, was a founder member of the MCCA in 1895 and has a Festival dating back to 1881 soon made me understand the size of the task in hand.” He went on to say “Largely woven around the Festival the essence of the Club goes far beyond the cricket and is a significant date in the diary for old friends and former players to catch up and reminisce. It is unique in National Counties Cricket and drives our much envied and gratefully appreciated membership. Norfolk cricket is something of which to be proud and I have been delighted to represent the Club home and away over the six years. I have been supported along the way by a very involved Committee, two splendid Presidents in the form of Robin Huggins and Gail Armstrong who have kept me largely on the straight and narrow. We have enjoyed a very inclusive relationship with Horsford CC who provide us with excellent facilities. However, times are changing with new drive and enthusiasm needed to take the enterprise forward, because enterprise is what the new National Counties Cricket Association (NCCA) entails. It will be about increased profile, sponsorship, live streaming of games, enhancement of facilities and excellence of play creating a pathway to First Class Cricket and hopefully beyond. I have been working with Mike Hanby for the last year to ensure that there is a smooth handover. He has an enormous respect and love of the game and your Club could not be in better hands.”

On his appointment at the AGM Mike Hanby said “it is a great honour and real pleasure to take over as chairman of my adopted county cricket club. I moved to Norfolk from another famous cricket county Yorkshire 23 years ago and have been a regular visitor to Manor Park since 2001. My first Norfolk games were at Lakenham. Richard has done an outstanding job and the one thing that I know for sure is that I have big shoes to fill! I hope to continue the excellent work and on behalf of everyone involved with Norfolk CCC I would like to take this opportunity to thank Richard for his hard work, commitment and the sheer passion he has put into the role. He leaves a very strong legacy with the county in good shape and I am pleased to say Richard will be staying involved. His wise counsel is something that I will certainly benefit from and Richard has helped to build a solid platform from which I hope we can develop further.”

Head Coach Chris Brown said “on behalf of the players, we would like to thank Richard for his excellent tenure as Chairman over the last six years. He has set the foundations for the smooth transition from the Minor Counties to the NCCA to allow Mike Hanby to ease into his new role. Mike has very strong knowledge of local and National Counties cricket, along with excellent business acumen and I’m very confident that he will lead the county well over the next few years. Norfolk have a strong relationship with Nottinghamshire CCC as part of their County Partnership Agreement and both Mike and their Director of Cricket, Mick Newell have been in communication about the way forward.”

Norfolk begin their campaign this Sunday with a home game against Lincolnshire at Manor Park in the NCCA one day competition. Hanby said “we should look forward with great optimism following the sides performances in 2019 (the last full season played) where we took the Eastern Division County Championship down to wire and came within fifteen minutes of winning the title. It was testimony to the great team spirit that has been developed by Chris Brown and captain Ashley Watson. They have worked hard to build the ethos of a united dressing room where it is all about the team. We have some talented young players coming through and the future looks bright.”

Hanby has highlighted two key areas that he wants the county to continue to grow. These are the strong relationships which the club has with the Norfolk Cricket Board and Nottinghamshire CCC. Hanby said “the Board are instrumental in the promotion and development of youth cricket and through the pathway program we want to see as many youngsters as possible progressing through the youth section into the Lions and then onto the first team. The great work being carried out by Lewis Denmark and the NCB team under the stewardship of Keir Hounsome is vital to the future of Norfolk cricket.”

The strong relationship with Nottinghamshire will serve the county well over the coming years and a lot of this is down to Chris Brown. Hanby said “it was good to meet Mick Newell the Director of Cricket at Notts and see his firm interest in making the partnership a big success. We were due to play a showcase game against Nottinghamshire last July but this fell victim to Covid. Hopefully the match will take place this year on July 20th at Manor Park. We are doing everything we can to get the game on to reward the loyalty of our members and the Norfolk public. Nottinghamshire should have some international players on view.”

Mick Newell said ” Nottinghamshire have fully endorsed Norfolk’s EPP and over the last four years we have developed an excellent relationship with three members of the Norfolk EPP joining the Nottinghamshire Academy. We have worked closely with Chris Brown in providing additional specialist coaching support and attending a number EPP sessions with different skilled professional coaches. This combined with Chris working as a spin bowling coach with the Nottinghamshire Academy has provided a seamless transition for the three players onto the Academy. We will continue to provide training opportunities at a Test Match venue for Norfolk players and support their coaches with Continuous Professional Development opportunities. Norfolk run an excellent EPP with a number high potential cricketers and we will look forward to developing this relationship further over the coming years.”

Chris Brown said “we value highly the strong links we have with Nottinghamshire and the opportunities this will create for our emerging young talent.” The partnership is very much a two way relationship and Newell has demonstrated this by allowing Sol Budinger who enjoyed his first season as a professional cricketer in 2020 after two years of aggressive run-scoring for the Academy and Second XI to play for Norfolk in the one day competition. The left-hander has chalked up more than 1,500 runs in a Nottinghamshire shirt since being recommended to coach Ant Botha two summers ago. He has made a strong start to this season recording two centuries in the opening games of the second eleven championship. The hard hitting batsmen will open the Norfolk innings with Sam Arthurton and is hoping to get an opportunity in the Notts first team later this summer.

Ashley Watson will again lead Norfolk in both formats and he is very keen to build on foundations laid in his first full season as skipper in 2019. Tom New has been retained as professional and will play an important part with his vast experience in helping to develop the younger players. The championship campaign gets underway on 11th July with a trip to Cleethorpes to take on Lincolnshire. Norfolk are planning subject to government guidance for the festival to take place as normal and this will start with a local derby against Suffolk on 25th July.

The Norfolk team for this Sunday’s knockout game against Lincolnshire at Manor Park is: